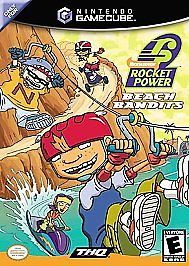 Rocket Power: Beach Bandits is a 2002 Licensed Game based off of the show Rocket Power and created by THQ. The game starts with Otto, Twister, Sam, and Reggie getting out of school for summer. They find out that all of the sand on the beach is gone and Otto worries about a surfing competition that can't be held without the sand. The kids try to find a way to get the sand back. They suspect that Golem Industries took all of the sand and head to various places where Twister uses his camera to get photographic evidence that Golem Industries is responsible for the sand disappearing.

The game was released on the Nintendo GameCube, PlayStation 2, and the Game Boy Advance.

Please only add tropes that specifically apply to this game, Tropes for the series should go on the page for the show.