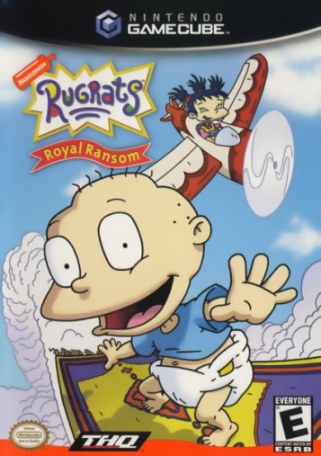 Rugrats: Royal Ransom is a 2002 video game based on the animated series of the same name. The game was released for both the Nintendo GameCube and the PlayStation 2. The game was published THQ and developed by Avalanche Software, the latter who would be known for Toy Story 3: The Video Game and Disney Infinity years later. Its handheld counterpart, Rugrats Castle Capers was released one year earlier for the Game Boy Advance.

The plot is as follows: Stu Pickles, Tommy's dad, creates the PlayPalace 3000, which is a huge playground made out of many levels that expands out of a small metal cylinder. He needs to leave to get duct tape and paper clips, so he leaves Lou Pickles to watch the kids. Once he (inevitably) falls asleep, Angelica enters the PlayPalace 3000 and takes the babies' toys away. She challenges the Rugrats to come and get them back.

Five of the babies are playable; Tommy Pickles, Chuckie Finster, Phil DeVille, Lil DeVille, and Kimi Finster. There's no noticeable gameplay difference between them. There are three difficulty levels: Baby Easy (just as simple as it sounds), Rugrat Medium (surprisingly rather difficult at many points), and Reptar Tough (insanely hard).

The game was mostly ignored by critics, though the GC version did sell quite well.