Video Game / Tak and the Power of Juju 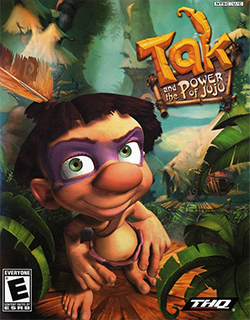 Tak and the Power of Juju is a 2003 video game made by THQ and Nickelodeon for the PlayStation 2, Nintendo GameCube, and Game Boy Advance. It got two sequels: one in 2004 known as Tak 2: The Staff of Dreams and the other in 2005 called Tak: The Great Juju Challenge. The franchise was later adapted into a short lived Nicktoon with two extra tie-in games in 2008 called Tak and the Guardians of Gross and Tak: Mojo Mistake.

Notable for being the only video game produced by Nickelodeon Games that was not based on an already-existing animated series on Nickelodeon, the game tells the story of Tak (Jason Marsden), a young shaman-in-training who lives in the jungle village of the Pupanunu People under the tutelage of the wise shaman Jibolba (John Kassir). For years, the Pupanunu have lived a peaceful existence thanks to the protection of the Moon Juju (Tina Illman), a powerful tribal goddess and a member of a race of powerful magical spirits called Jujus.

Unfortunately, Tak's home is put in jeopardy by Tlaloc (Rob Paulsen), a nefarious and power-hungry shaman who seeks revenge on the Pupanunu people after losing the coveted position as High Shaman to Jibolba. To achieve his vengeance, Tlaloc steals the moonstones which are the source of the Moon juju's power, using them not only to weaken the Moon Juju but also to turn the villagers (sans Tak and Jibolba) into stupid, helpless sheep.

Fortunately, a prophecy foretold by previous Pupanunu shamans predicts that Tlaloc will be thwarted by a mighty warrior trained by the High Shaman who will save the Moon Juju and bring peace back to the tribe; Jibolba is convinced that the mighty warrior is his other apprentice, Lok (Patrick Warburton). Unfortunately, Lok has seemingly also been turned into a sheep by Tlaloc, forcing Tak to go on a series of Fetch Quests in order to turn Lok back to normal.

Tropes for the Game: