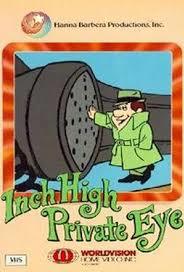 Inch High, Private Eye was a Hanna-Barbera cartoon on NBC, premiering September 8, 1973 and running just one season of 13 episodes.

Inch High was a tiny (inch high, as his name implies), pragmatic but none-too-efficient employee of the Finkerton detective agency. He was assisted by his niece Lori, his addle-brained strongarm Gator, and his cowardly St. Bernard Braveheart. Mr. Finkerton, head of the agency, would love nothing more than to fire Inch on principle alone, but ascribing to the adage "the bigger they are, the harder they fall," Inch brings in his criminals. It was never disclosed how Inch High got to be as tiny as he is, but a publicity card from Hanna-Barbera attributes it to a secret formula he concocted.

After its NBC run, Inch High would go into syndicated replays in select markets for some ten years.