Western Animation / The Good, the Bad, and Huckleberry Hound 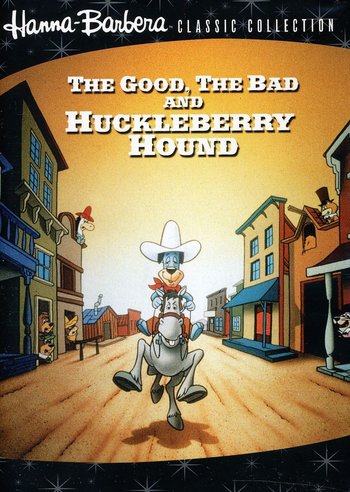 The Good, the Bad, and Huckleberry Hound is a 1988 Made-for-TV Movie, created as a part of the Hanna-Barbera Superstars 10 series.

The film follows the adventures of Huckleberry Hound, who, in his journey to a raise a small farm with goats and pigs, comes upon the California town of Two-Bit, where he meets up with the residents, Yogi Bear and Boo Boo, who've run away from Jellystone Park; Snagglepuss, who serves as the piano player at Rusty Nails' Saloon; Hokey Wolf, who acts as the town's mayor, and Quick Draw McGraw and Baba Looey, who run the Two-Bit National Bank. Unfortunately, Huckleberry runs afoul of a group of bandits known as the Dalton Gang: Hair Trigger Tempered leader Stinky Dalton, diminutive Manchild Finky Dalton, Ambiguously Gay Pinky Dalton, and Dumb Muscle Dinky Dalton. Huck is appointed as the new sheriff of Two-Bit, where it is his job to try to rid the town of the notorious Dalton Brothers.

A subplot of the TV film also includes Huck forming a romantic relationship with an American Indian girl hound named Desert Flower, which occurs after Huck gets blasted off by the Daltons.

The movie was the last production voiced by Daws Butler, who passed away on May 19, 1988 - just days before the movie premiered on television - which added a certain piquancy to the ending, which reveals how the characters wound up. Especially as Huck rides off into the sunset, singing.