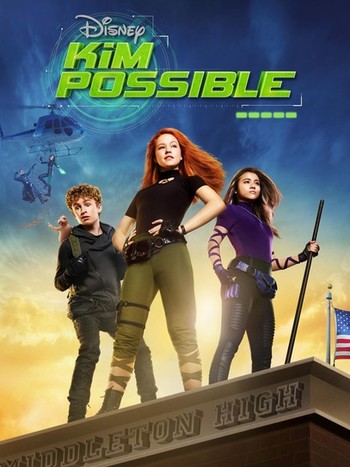 To save the world, fight as hard as Possible.
Advertisement:

Kim Possible is the third Disney Channel Original Movie based off of the animated series of the same name, and the first Live-Action Adaptation of the series.

The film's plot follows Kim and her best friend Ron at the start of their first year of high school. Kim's first day is awful, but it gets better when she befriends a girl named Athena, whose day was even worse. Athena turns out to be a huge Kim Possible fangirl and Kim finds herself greatly enjoying her company. That is until she lets Athena tag along on a mission with her and Ron, where the rookie quickly eclipses Kim herself, leaving our heroine completely unsure of her identity if she isn't the best at everything. Meanwhile Dr. Drakken, recently broken out of prison by loyal henchwoman Shego, is putting together a new plan to gain whatever special "spark" Kim has that makes the teenager such a formidable opponent.