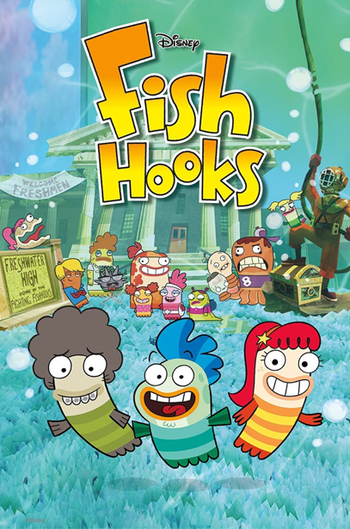 One, two, three, four!
Who's that knockin' at my door?
Five, six, seven, eight!
Hurry up and don't be late!
Nine, ten, eleven, twelve!
Got a secret I can't tell!
Flap your fins, flip your tail!
School's out, ring the bell!
— Opening Theme
Advertisement:

Fish Hooks was an animated series on Disney Channel, created by Noah Z. Jones (whose other claim to fame is Almost Naked Animals) and produced by Alex Hirsch (whose other claim to fame is Gravity Falls, also on Disney Channel). The show deals with three fish: Milo, the eccentric party guy (Kyle Massey); his nervous brother Oscar (Justin Roiland), and their "overly dramatic" female friend Bea (Chelsea Kane), as they attend high school—namely Freshwater High—in an aquarium at a pet store named Bud's Pets. The series chronicles their daily lives as they deal with various things, such as friendships, dating, and sports, as well as typical t(w)een issues such as giant lobster attacks and field trips to the hamster cages.

Well, that's one reason to hang out after the last bell.

Well, that's one reason to hang out after the last bell.