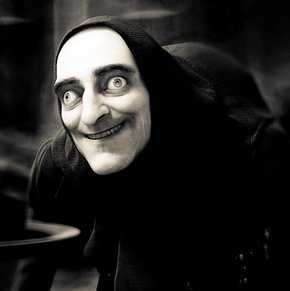 "Damn your eyes!" "Too late!"
"I can't stop looking into those entrancing eyes... Can she see all around her? Maybe she can see through the very fabric of time and space!"
— Phoenix Wright on Derpy Hooves, Turnabout Storm
Advertisement:

How do you make a blank stare even blanker? Have the character's eyes face slightly (or even more than slightly) away from each other — reverse cross-eyes, if you will. It's usually used to make the character look unintelligent or dumbfounded, causing it to become known as "derp eyes" in some Internet circles. In real world English this is called "wall-eye" or "squint", and in medical jargon "exotropia".

Sometimes however, they can be used for a more serious effect, such as showing that a character's mental stability is loosening, emphasizing an emotion (commonly anger or happiness); sometimes this is done when a character mocks another, or to emphasize that they act in a way unlike they usually do. They may occasionally be the result of plain old physical eye damage.

A particularly common form of Off-Model in both hand-drawn and computer-generated 2D animation, especially when depicting an aside glance. Compare Comically Cross-Eyed, which is also used to convey stupidity or insanity, but is almost always Played for Laughs.