Film / The Empire Strikes Back 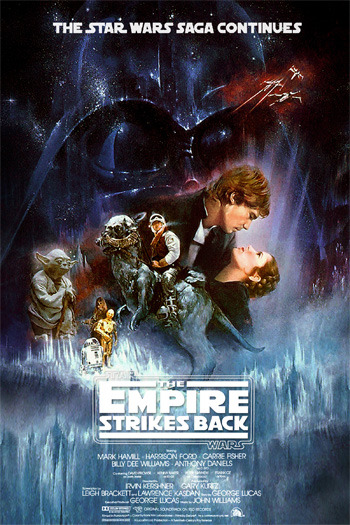 Darth Vader: The Force is with you, young Skywalker...but you are not a Jedi yet.note Clockwise from center: Darth Vader, Han Solo, Princess Leia, Luke Skywalker on a tauntaun, C-3PO, Chewbacca, R2-D2, and Yoda.
It is a dark time for the
Rebellion. Although the Death
Star has been destroyed,
Imperial troops have driven the
Rebel forces from their hidden
base and pursued them across
the galaxy.

Evading the dreaded Imperial
Starfleet, a group of freedom
fighters led by Luke Skywalker
have established a new secret
base on the remote ice world
of Hoth.

The evil lord Darth Vader,
obsessed with finding young
Skywalker, has dispatched
thousands of remote probes into
the far reaches of space....
Advertisement:

Try to describe The Empire Strikes Back here.

In the aftermath of the Death Star's destruction, the Empire has cracked down on the Rebel Alliance, forcing the ragtag resistance to go into hiding on the barren ice planet Hoth. After becoming lost in a blizzard while on patrol and nearly dying, Luke Skywalker (Mark Hamill) sees a vision of his dead mentor Obi-Wan Kenobi (Alec Guinness) instructing him to search for a legendary Jedi master named Yoda (Frank Oz).

Rescued by Han Solo (Harrison Ford), he recovers just in time for the Empire to discover and lay siege to their base. Upon evacuation, Han and Leia Organa (Carrie Fisher) flee in the damaged and malfunctioning Millenium Falcon, strugling to stay ahead of the Imperial Navy, while Luke goes to train with the mysterious Yoda. Eventually, circumstances reunite the friends for a climactic confrontation with the Empire, including a showdown with Darth Vader (David Prowse, with voice dubbing by James Earl Jones) in which Luke learns a terrible truth...

The film also stars Billy Dee Williams as Lando Calrissian, an old friend of Han's, Anthony Daniels and Kenny Baker as C-3PO and R2-D2, and Peter Mayhew as Chewbacca.

The film is followed by Return of the Jedi.

The Tropes Strike Back:

open/close all folders
Tropes A to B
Tropes C to E
Tropes F to H
Tropes I to M
Tropes N to R
Tropes S
Tropes T to Y
"Luminous beings are we. Not this crude matter."
Feedback

Darth Vader is but a lackey of the Emperor, the true ruler of the Galactic Empire.

Darth Vader is but a lackey of the Emperor, the true ruler of the Galactic Empire.