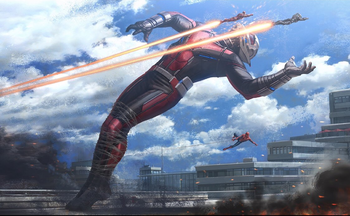 Giant-Man was dominating the fight until Spider-Man realized they could just web his legs together and topple him...
"Additionally, the Kool-Aid Man is top-heavy. All Bib has to do is follow the time-tested strategy of taking the legs out that works so well against other top-heavy opponents from cattle to André the Giant."
— Grudge Match Commentary, The Kool-Aid Man vs. The Michelin Man

In fiction, one effective way to immobilize or incapacitate large monsters, Humongous Mecha, or oversized opponents is by targeting their legs whether by somehow restricting their movement, using weapons to compromise their structural integrity, or even utilizing Agony of the Feet. This is somewhat justified (assuming the bindings are strong enough or the weapons are powerful enough), because without free use of their legs in their fully functional state, the monster, machine, or person will likely lose their balance and crash.

Compare to Knotty Tentacles where a creature with tentacles or stretchy limbs is tricked into incapacitating itself by tying itself into knots. Compare Tied Together Shoe Lace Trip where a regular sized human is incapacitated by tying their shoelaces together causing them to trip and fall when they try to walk. When a giantnote  or normal sized person dealing with tiny people is completely tied down, instead of just their legs, that's a Gulliver Tie-Down.

Contrast Disney Villain Death, where tripping up an opponent sends them falling to their death rather than simply incapacitating them for the duration of the conflict.