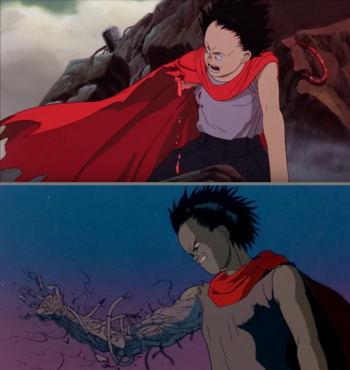 "I landed the ship safely... for the most part. [puts leg on table] Eh? Pretty cool robot leg! I'm still workin' on it, maybe add some jets or a can opener..."
— Della Duck, DuckTales, "What Ever Happened to Della Duck?!"
Advertisement:

In the real world, losing a limb is a life-altering event. There is the emotional trauma, the physical therapy, the newfound difficulty of simple tasks like walking or grabbing objects, the inevitable body image issues, and possibly a forced career change.

Not so in this fictional universe. Through magic or advanced science, they have Artificial Limbs or cloned parts that are as good (or better than) the original, or they're able to regrow lost limbs, just like a lizard. Dismemberment becomes a mere temporary inconvenience, even an opportunity to get an upgrade covered by health insurance.

Presumably, it's a matter of time that this will become Truth in Television, as fully-functional prosthetic limbs and lab-produced biological organs are already taking their first steps.

When a person (with no inherent healing powers) loses a limb and gets a replacement from doctors or healers with no loss of function and minimal angst, it's this trope. If the replacement is inferior to the originals or otherwise a burden or the recovery was grueling, the dismemberment wasn't exactly cheap, and if it turns out Cybernetics Eat Their Soul, that counts as life-altering too. If a character can shrug off limb loss because of their Healing Factor or Appendage Assimilation, it's a Good Thing You Can Heal. If they have or gain superpowers that make up for their new disability, it's a Disability Superpower or We Can Rebuild Him.

See also Death Is Cheap, Immortal Life Is Cheap, Plug 'n' Play Prosthetics. Like those tropes, it's a way to show things are serious without having to significantly alter the course of your characters' lives.

Subtrope of Throwing Off the Disability.