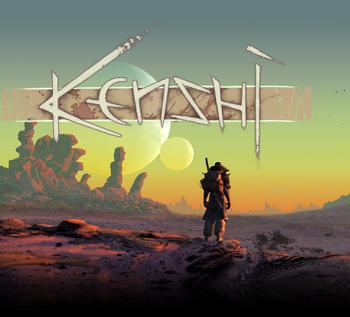 "To live is to struggle"
You are not The Chosen One. You're not great and powerful. You don't have more hitpoints than everyone else. You are not the center of the universe, and you are not special. Unless you work for it.
Advertisement:

Kenshi is a tactical RPG / RTS / Simulation from Lo-Fi Games

based around a Wide-Open Sandbox, with emphasis on "sand." After 12 years in development and nearly five years in Early Access, the game was released on Steam and GOG on December 6th, 2018.

Kenshi has no linear narrative as such. While the world has a surprisingly elaborate backstory that can be pieced together from different in-universe sources if you decide to go looking for it, most of the "plot" of the game itself happens mainly through Emergent Gameplay. You are dropped into a vaguely post-apocalyptic desert with nothing but a few Cats and a sword on your back. It's up to you to decide how you want to survive in this world.

The world contains many biomes, each with their quirks and local fauna, as well as their environments affecting things like wind power, material quality, water quality, access to furs or arable land, etc. There is even a swimming skill, and you can cross the oceans.

The game includes a tech system, requiring your characters to trade for technical books to advance beyond very basic tech levels. Higher levels require scavenging from the desolate installations of the previous era for advanced engineering or technological manuals.

In March 2019, Lo-Fi Games announced that they had begun development on Kenshi 2, which will be a prequel, set a millennia before the first game.

Shek party member: And I'm honored to be their enemy.