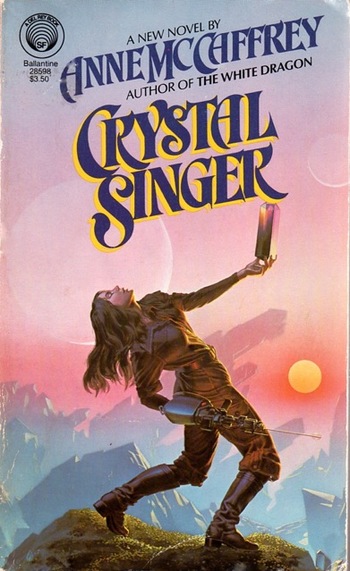 Killashandra in her element
A science fiction trilogy by Anne McCaffrey, consisting of The Crystal Singer, Killashandra, and Crystal Line.
Advertisement:

The technology that supports intergalactic civilization is made possible by the unique crystals mined only on the planet Ballybran by the exclusive and secretive Heptite Guild, by far the richest guild in the galaxy. The Heptite Guild occupies the entirety of Ballybran and maintains a monopoly on the precious Crystal, for one very good reason: once on Ballybran, humanoids are infected by a crystalline spore that forms a permanent symbiotic relationship with its host...if it doesn't kill them first. The majority who survive form an imperfect bond with the organism and are permanently bound to Ballybran, guaranteed an agonizing death if they ever leave. These become the Guild's support crew.

The few who manage a successful symbiosis are given a wide range of advantages, including enhanced senses, accelerated healing, and a greatly increased lifespan. They can also leave the planet for limited periods without dying. These become Crystal Singers: an elite group of miners who venture forth on Ballybran's ranges to cut raw crystal. Strike a lucrative vein of the invaluable Black Crystal and your fortune is assured, allowing Singers to live in hedonistic luxury on any planet in the galaxy, feared and respected by all who see them. But even the Singers must return to Ballybran to restore their symbiont or risk dying in agony. Not to mention crystal cutting is physically exhausting, dangerous, and addictive, with the added risk that the wild wind storms that sweep the ranges can drive a Singer to madness, reducing them to a mindless husk.

Killashandra Ree, her dreams of interstellar fame as a vocalist crushed, is intrigued by the prospect of wealth, respect, and near-immortality. Making her way to Ballybran, she applies to the Heptite Guild. With a faultless transition and a natural affinity for Black Crystal, Killa soon becomes the star of the guild, attracting the attention of the Guildmaster himself, who finds that Killa's inquisitive nature, rugged self-reliance, and gifted flair for performance combine to make her perfect for all sorts of complicated roles: diplomat, spy, and explorer.

What follows is the centuries-long journey of Killashandra Ree as she finds, loses, and regains enduring success and true love.