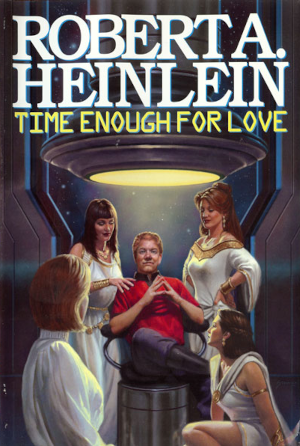 With the medicinal advancements of the future, being over 200 years old is no longer an excuse.
"It's not my fault, okay? I'm immortal. After a thousand years you've pretty much fucked everyone."
— Elowyn the Elf, CollegeHumor, My Elf Girlfriend: Sex Talk

Immortal characters have a lot they could do with the potentially infinite time on their hands. Maybe try to live a normal life, or maybe shape the world as a whole, but they can really get around, and some get around in a much more carnal sense. Apparently being unable to die ups your libido, as these immortals tend to have a lot more partners in one lifespan than most, with countless other lifespans to spare. Because the Mayfly–December Romance will almost certainly end in tragedy, the immortal wants to have quick flings to avoid heartbreak. Perhaps they already got around, it's just that immortality gives them much more advantage.

If the Immortal Procreation Clause is in effect, that may encourage them to have a lot of sex without worrying about children (aside from when STD Immunity is subverted), or they may just be irresponsible and potentially father/mother hundreds of kids over hundreds-thousands of years... undoubtedly leading to a Tangled Family Tree and them being a Living Distant Ancestor. If Lamarck Was Right, then they might end up founding a Society of Immortals made of descendants.

While Vampires Are Sex Gods is about the vampire's sex appeal, the immortality that comes with might lead to a Vampire's Harem.

Compare Deathless and Debauched. If an immortal is focused on a romantic or platonic relationship, it's a case of Mayfly–December Romance and Mayfly–December Friendship. Compare Immortality Bisexuality, where eternal life encourages the immortal to swing both ways. It may result in the character being a Living Distant Ancestor to many people. It may also be why Living Forever Is Awesome, or the opposite, Who Wants to Live Forever?.