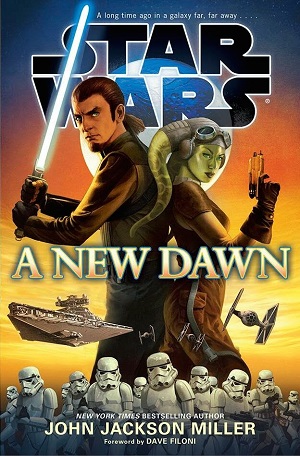 A New Dawn is a Star Wars Expanded Universe novel by John Jackson Miller (author of previous Legends works including numerous comic books and Kenobi), and the first novel to be included as a part of Disney's Continuity Reboot of the Star Wars franchise. It serves as a prequel to Rebels. Taking place six years before the show, it details how hotshot pilot Hera Syndulla and rogue Jedi Kanan Jarrus meet, leading to a small-scale uprising against the Empire on the Death World Gorse when the Empire's efficiency expert Count Denetrius Vidian arrives for an inspection.

On October 6, 2015, Del Rey published The Rise of the Empire, a compilation of A New Dawn, Tarkin and three original short stories.