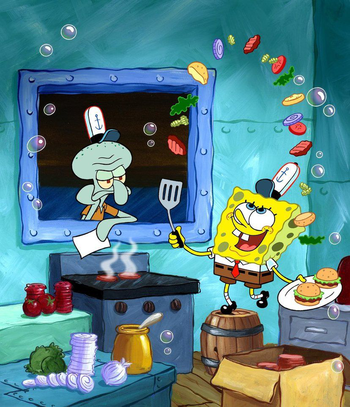 Anyone who can do that with a spatula clearly loves the work that gave him the tool.
Mrs. Chen: Shaun, did my daughter apply to any new jobs this week?
Shang-Chi: She really likes her job. We both do.
Mrs. Chen: Mhmm, Waigong didn't move here from Hunan so you can park cars for a living.
Katy: Well, on that note, I think we're gonna miss our bus. I'm sorry for my unacceptable job. And for staying out late last night, trying to enjoy my life.
— Shang-Chi and the Legend of the Ten Rings
Advertisement:

There are certain boring, low-paying jobs most people fear being stuck with when they grow up: burger flipper, garbage man, janitor, retail store greeter, etc. This character has one of these jobs... and wouldn't have it any other way.

This trope can reveal many things about the character. Maybe they're just that unflappably cheerful. Maybe they enjoy contributing to society by doing simple and/or unpleasant jobs necessary for a functioning society that few others are willing to do. Maybe it doesn't matter how miserable the work is, as long as they get to work with (or for) their friends. Maybe they came from a background of poverty and are simply glad to be getting any kind of wage. Or maybe they just genuinely enjoy the work. A more cynical variation is when one employee is a Lazy Bum who enjoys their job because they can push their work off on more responsible co-workers.

Sometimes used as An Aesop to teach people that finding enjoyment in your work is more important than your salary.

Of course, such a character may be hiding his true capabilities or intentions — and might even secretly work with others who do likewise.

Often a character like this will be contrast to a "conventionally" miserable co-worker of similar rank.

A happy Working-Class Hero tends to fit this. A more extreme version of this is Happiness in Slavery. If a character's dream is to obtain one of these jobs, it's Humble Goal. Sometimes overlaps with Mundane Luxury. Compare Call to Agriculture, where a powerful character wants to retire to work on a farm. Contrast Soul-Crushing Desk Job, a job that leaves people miserable despite generally having better pay.