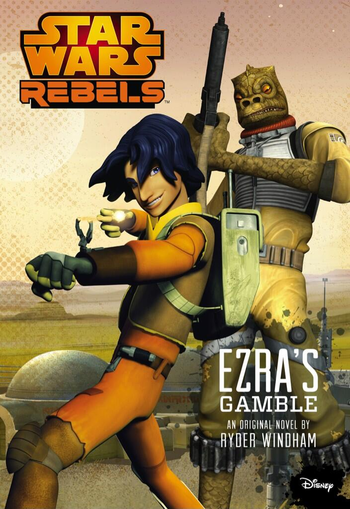 The Pickpocket & the Bounty Hunter.
Ezra's Gamble is a Star Wars Expanded Universe junior novel written by Ryder Windham (who had previously written The Clone Wars: Secret Missions, now considered Legends), as a part of the Rebels multimedia project. It is a Prequel to the events of Rebels.

Taking place a few days before meeting the Ghost crew, fourteen year-old Ezra Bridger is selling tickets for Arena Day — an underground tournament where mighty beasts battle to the finish and all the swindlers, gamblers and no-gooders come from all corners of the planet to make a profit. However, Ezra is whisked into an unlikely partnership with the fearsome bounty hunter Bossk and enmeshed in a high-stakes chase against an endless fleet of Stormtroopers. Ezra isn't willing to trust anyone, but he soon learns that surviving doesn't always mean just fending for himself.

It was released on August 5, 2014, about a month before Rebels began airing on television.