Literature / One Thousand Levels Down 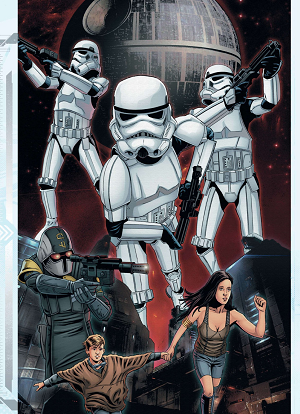 "One Thousand Levels Down" is a Short Story set in the Star Wars universe written by Alexander Freed and featuring illustrations from Joe Corroney and Brian Miller. It first appeared in Star Wars Insider 151, which was released on July 22, 2014.

Following the destruction of Alderaan by the Death Star, Alderaanians living on Coruscant are being hunted down by the Empire. Sixteen year old Anandra Milon is forced to go on the run with her younger brother Santigo as they avoid Imperial forces and seek a way off of Coruscant.