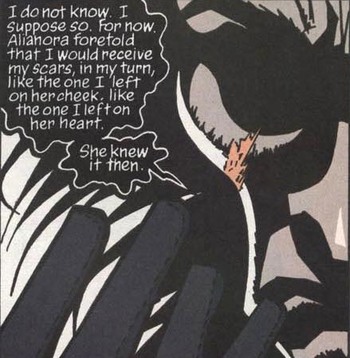 Fess up: you're keeping it because scars look cool.
"Before I went into that... interrogation center... I asked the Prophets to give me the strength to get the rest of you out of there. And... that in exchange, I...I said I'd give up my life. Well, as it turned out, I was able to rescue you, Shakaar and Lupaza. It's only cost me an arm. I felt the...the Prophets were generous. Somehow, replacing the arm seems... ungrateful."
— Furel (explaining why he chooses not to get a prosthetic arm), Star Trek: Deep Space Nine
Advertisement:

A character might voluntarily choose to live with an impediment, whether magical or mundane. From an outsider's perspective, there's no logical reason why they should remain that way. Maybe he's unable to move or speak. Maybe they're Blessed with Suck. Maybe the cure is rare or expensive but is still within easy reach. So why would the character choose to keep the handicap?

There's a number of possible reasons why. The disabled person might just be accustomed to living with the disability. They might feel that their disability is simply part of who they are or be proud of being disabled. Someone blind or deaf since birth would have a tough time adjusting to the addition of a fifth sense, and one turned into a werebeast many years prior would have long ago become accustomed to a bestial lifestyle. A neurodivergent person might feel that being neurotypical would fundamentally alter who they are. Ultimately, the disabled character believes that it would be more of a hassle to be abled than to be disabled.

They may also be unwilling to correct the handicap if it makes them more appealing in the eyes of others: for example, for an attractive Love Interest, small imperfections like glasses, speech impediments, or a slight limp would often serve as an additional "turn-on".

The cure could go against their religion or could negate a core principle of their moral compass. Outsiders may claim that Belief Makes You Stupid and the cursed person may have a Crisis of Faith or a Moral Dilemma. They may also believe that they're guilty of something (especially in case of injury-induced handicap) that they believe they deserved it and thus don't wish to have it removed.

Many cases of Reed Richards Is Useless imply this trope, even if it's not stated outright. When a character lives with a disability in an extremely (technically or magically) advanced world, it's quite difficult to believe that no cure was available for them, so it may be inferred that they decided against taking the cure. Though that's usually the result of creators introducing a disabled character for whatever reason (say, to deliver a disability-related plot or Aesop, or for representation) and hoping the audience doesn't think too hard about what ought to be possible with all the phlebotinum lying around.

Compare Cursed with Awesome and Disability Superpower (which are common reasons for refusing to get rid of a curse or a disability), Can't Stay Normal, Freaky Is Cool, Be Yourself, I Choose to Stay, Scars are Forever and Status Quo Is God. Also compare Elective Mute and Elective Broken Language, for someone who chooses not to speak or to speak in broken language in spite of having the ability to talk properly. Contrast I Just Want to Be Normal.