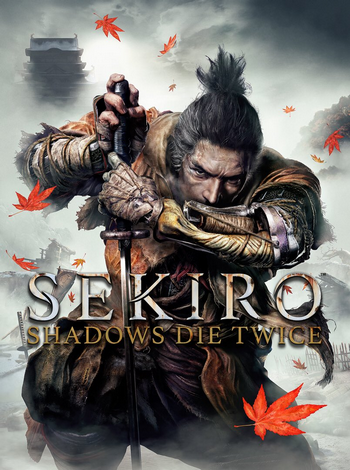 Sekiro: Shadows Die Twice is an Action-Adventure game developed by FromSoftware and published by Activision. The game released on March 22nd, 2019 on Xbox One, PlayStation 4, and PC. It is directed by Hidetaka Miyazaki, of Demon's Souls and Dark Souls fame.

The game is set in the last years of Japan's Sengoku Era, in the fictional province of Ashina.note Although there was an actual Ashina clan in real life As the whole country was plagued by war, Isshin Ashina staged a coup against the previous lord and managed to wrest control of the province after a key battle against General Tamura. Incidentally, a shinobi named Owl crossed paths with a young boy roaming the battlefield. Impressed by his composure, Owl then offered the boy to join him.

Twenty years later, the boy has grown and become the Wolf, a shinobi of the Ashina clan. He is tasked with a critical assignment in the face of the shogunate's attempts to centralize power: protecting Kuro, the Divine Heir to the Dragon's Heritage, which makes him and those of his choosing immortal. The pair are captured by a radical faction within the clan led by Genichiro Ashina, who hopes the Dragon's Heritage can turn the tide in the otherwise unwinnable war against the shogunate. Wolf, whose oath is to Kuro and not the clan at large, attempts to engineer an escape, but this goes awry when Genichiro intercepts them and severs Wolf's left arm in battle, leaving the shinobi unable to resist as Genichiro carries Kuro back into the fortress.

Some time later, Wolf awakes in a dilapidated temple to learn he has been nursed to health and given a prosthetic arm hiding an array of weapons by a mysterious Sculptor of wooden Buddhas. Bound by the Iron Code of the Shinobi, Wolf must now assault Ashina Castle to bring back Kuro at any cost—and thanks to the Dragon's Heritage, death is only a minor obstacle.

The gameplay of Sekiro has shifted in several ways from the template of the Souls series, letting go most of the RPG elements such as weapon and armor customization or stat builds. In exchange, it adds the movement options and stealth of Tenchu, and Wolf's prosthetic left arm also serves as a combination of trick weapons and a grappling hook, enabling him to use a selection of special tools which add unique spins to combat. The game's combat system is also much more developed than in past titles, allowing Wolf to attack directly, deflect strikes, dodge out of grabs, jump above sweeping attacks and either deplete the enemy health bar or fill a Posture bar to perform a Shinobi Deathblow, killing the foe instantly. The game also leaves behind the Western Fantasy for a brand new setting based on feudal Japan with a slightly more defined story. However, Souls fans will still recognize the brutal difficulty, dynamic enemies, and very frequent deaths.

It's an Eastern dragon with "Divine" in its name. What did you expect?

Example of:
Dragons Are Divine

It's an Eastern dragon with "Divine" in its name. What did you expect?