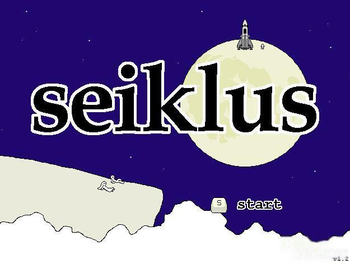 There once was a fellow by the name of Clysm. While browsing the Internet in 2003, he discovered Game Maker, and decided to fool around with it. After about six months worth of work, he created Seiklus, a simple Metroidvania with an emphasis on exploration and discovery rather than simple combat. He threw in some chiptunes, called it a night, and posted it to the official Game Maker forums and asked if people liked it.
Advertisement:

In somewhat longer, the game shot to popularity with both the indie and casual games crowds, and paved the way for other exploration-heavy Metroidvania games like Knytt and An Untitled Story. With its simple but colorful graphics, simple but retro soundtrack, and simple yet engrossing gameplay, it gained a well-earned place in the indie-game hall of fame.

The story (or what there is of one) is simple. A small white fellow has been separated from his girlfriend, thanks to an unfortunate meteor crash. Now, he must seek out a series of artifacts that will help him return to her. After exploring the world and finding the way up, he now must find all the colored whisps scattered around the world, find the final artifact, and uncover all the pieces of a moon-shaped amulet.