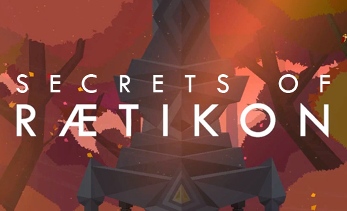 Secrets of Rætikon is a 2014 2D action-adventure game from Austrian indie developer Broken Rules of And Yet It Moves fame, released on Steam initally through the Early Access program in January, before progressing into a finished product in mid-April.
Advertisement:

The game has the player take on the role of an orange bird that plummets out of the sky into a lush natural landscape in what the game's Steam description describes as the Alps. They have minimal tutorial instructions to guide them, along with a bunch of tablets with strange runes on them lying around. The player discovers through a bit of exploring that they have to gather tiny triangular objects called "slivers", which you then use to activate one of many mechanical statues throughout the game world, in the hopes that it will release one of seven large MacGuffins that you can use to power up an even larger machine, all the while stumbling upon runes floating in the air, which you can collect in the hopes of using them to decode the aforementioned tablets.

Oh yeah, and there's the local wildlife to contend with as well. Not all of them are immediately happy to see you.

Secrets Of Rætikon contains examples of: