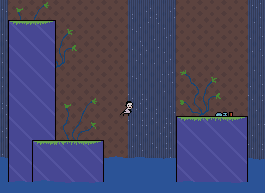 The Knytt can climb, and jump. And walk. (But not swim.)
Advertisement:

The story is quite simple: The Knytt, a weird little creature, gets abducted from his native planet by an alien. However, before reaching its supposed destination, the alien's ship crashes against an asteroid, and the alien makes an emergency landing on a nearby planet. If he ever wants to get home again, the Knytt must help the alien recover the parts of the spaceship which has been scattered all over the strange planet.

The strange little world is a gorgeous, diverse maze full of little houses and curious little critters. Some want to attack the Knytt, whose only power is jumping — it can't fight or defend itself. Most just live their own little lives while the Knytt walks by.

The game can be finished in less than an hour, but its non-linearity gives it a high Replay Value. There are also a few hidden shortcuts and massive bonus area too, if you know where to look. You'll probably want to play it a few times over. With a nice cup of tea.

. Or, if you like, you can watch a Let's Play by DeceasedCrab here