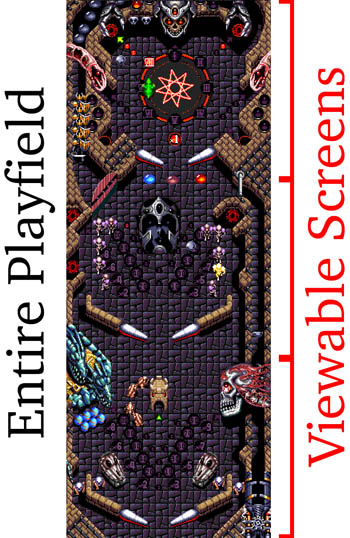 In the early days of video games, memory was limited and quite expensive, and some games simply could not afford the CPU cycles to present a continuous, smoothly scrolling game world. The world was thus divided into a series of "screens", analogous to rooms with fixed camera positions. Travelling off one side of the screen caused the game to scroll by an entire screen at a time to reveal the next area — or, if the hardware couldn't afford actual scrolling — simply "flip" to the next screen with no transitional effect.

A curious side effect of this is that, just as the game couldn't afford the memory to provide continuous scrolling, it couldn't afford the memory to keep track of whatever was offscreen, either; the screen edges essentially became borders to NPCs, monsters, attacks and projectiles alike, and only the player was able to cross from one screen to the next. Is there a hungry wolf bearing down on your Sir Graham? Simply run off the edge of the screen to the next, and it'll forget all about you.

Some of these games made things more interesting by giving every screen a title and displaying these titles prominently, perhaps next to the Status Line.

Sometimes justified (or at least Hand Waved) by placing actual barriers (walls or doors) at the edge of a screen to provide a logical separation.

It can become a cause of Trial-and-Error Gameplay, by preventing the player in a Platform Game to evaluate whether or not that gap before them is a Bottomless Pit or if there is a screen below it to land safely on. It can also lead to the Player Tic of performing some action (like jumping) near the edge of the screen to see if it persists across the transition.

Common in games designed for old computers like the MSX and Apple ][ which had no special video hardware for scrolling. Even the Nintendo Entertainment System only had enough video RAM for scrolling in one direction (though extra VRAM could be put on cartridges), so it wasn't uncommon for NES games to use some flip screen transitions just to avoid the programming complexities of scrolling vertically and horizontally in the same area. More recent games featuring Retraux themes may purposefully invoke this.