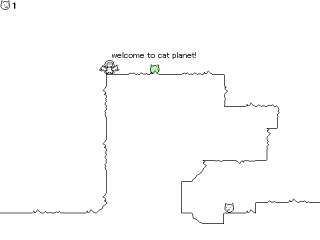 everybody cat planet!
hey there everyone, it's cat planet! hell yeah we're a lil angel girl there's a caaat! oh well hello there mr. cat! thank you for welcoming me!
— raocow on this game.
Advertisement:

cat planet is a freeware game by sylvie

You play as a human girl with wings, and the last of your kind, and you must collect all the cats on the cat planet. While the controls are somewhat bizarre, in that any key will allow you to take flight, holding 'up' will increase your altitude, and holding 'down' will decrease it. While you can die, there are no game overs. However, you can't save, so the game must be beaten in one go!

A fansequel by the name of super cat planet can be downloaded here.

Not to be confused with Cat Planet Cuties.

this planet contains cats of: