She just wanted to get out. 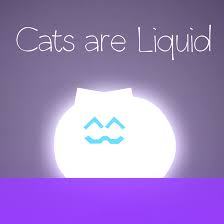 Cats are Liquid is a 2D platformer phone game, in which you are a cat who can turn into liquid, navigating through various maze-like rooms.
Advertisement:

Warning: There are many spoilers, and though they are marked some tropes are spoileriffic by nature, so be careful!

Cats are Liquid provides examples of the following tropes: