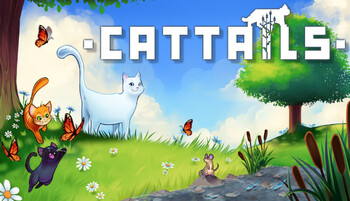 Cattails is a sprite-based simulation game that was released on December 1st, 2017, where you play as a cat. You fight for territory, hunt, and act as a feral cat. The game is available digitally on PC and Nintendo Switch.

Despite its name, Cattails has nothing to do with plants. The name is actually a pun on "Cat Tales" and, as this suggests, you play as a cat and make your own story.