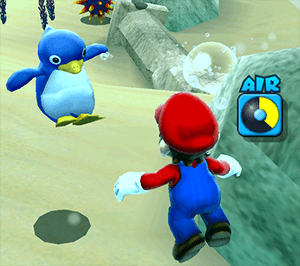 In water levels, there will often be designated stops that allow for the oxygen meter to be refilled, such as ceiling vents that allow you to resurface and breathe or bubbles that pop up in certain places to automatically refill the meter.

Frustratingly, your oxygen meter is sometimes invisible yet still just as real and waiting to bite you; this is most likely to happen in a First-Person Shooter. This is probably just because the interface is already full and they don't want to waste space on something not even used in most levels... and surprisingly, not all games decided to only make it visible when in use.

It's worth noting that dying from lack of oxygen is often played unnervingly straight even in games where deaths are otherwise cartoonish or even Played for Laughs.

The Oxygen Meter may be removed entirely if your character can somehow breathe underwater (through some sort of ability or equipment, or even just being native to water) or doesn't even need to breathe at all (if you're playing as a robot, for example).

An occasional alternative to the Oxygen Meter is to allow only for a finite amount of time underwater before the player character automatically floats back to the surface unharmed—however, this also places a restriction on level design, to avoid the player getting stuck should their "swim timer" run out in the middle of, say, an underwater tunnel or cavern with no air on the surface.

A third way, of course, is to just prohibit underwater travel entirely—either by limiting swimming mechanics to the water's surface (such as in Bully), using Super Drowning Skills, or by simply not allowing the player to interact with deep water in the first place using Invisible Walls. Sure, you can still splash around in puddles and knee-high streams, but to go jump in a lake? Are you crazy?

Games that include a Sprint Meter will often replace it with the Oxygen Meter underwater (or use the same meter for both purposes), since actions that use the Sprint Meter are typically unavailable while swimming.

Characters with Super Not-Drowning Skills, by definition, rarely have need of an Oxygen Meter.