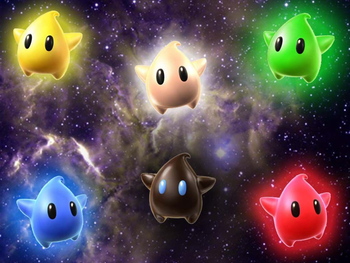 Ah, the stars. They've fascinated skywatchers throughout all of human history. Now, it's been well established that a good way of highlighting how other your fantasy world is is to put a different sky above it. And as it happens, one of the recurring methods of doing this in fiction is to make the stars literally living entities, optionally ones who can take human form and come down to Earth. The details of how these beings act vary wildly through fiction; sometimes they're fairly human, sometimes they're horrific otherworldly Eldritch Abominations. Either way, one major underlying implication of this trope is that our understanding of the universe is nowhere near as sophisticated as we'd like to believe.

See also Celestial Body (where a character visibly resembles a constellation), Stars Are Souls, The Face of the Sun, and possibly Genius Loci. Sinister Sentient Sun is a sub-trope.