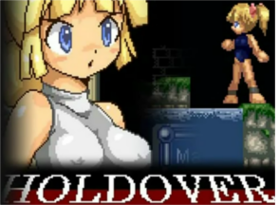 Take your pick. Is that Roll or Samus?
Advertisement:

A young girl named Marie wakes up in a dank, dark laboratory wearing nothing but a white, one-piece swimsuit, and two metal anklets around her bare feet, designed to keep her healthy. A holographic message from her father says that she should have just woken up from a special capsule designed to cure an illness of hers, and that she should now try to leave the facility she resides in.

Easier said than done, of course, since the facility has long since been abandoned, is nearly completely flooded (and despite being suited for it, those anklets make it impossible to swim), and is full of various security robots out to vaporize her (and her swimsuit) with powerful lasers. She quickly finds an advanced armor swimsuit that can shield her from the lasers, at the cost of vaporizing the half that was hit.

. It can be downloaded from either there or from the game page of Fox Eye's central website