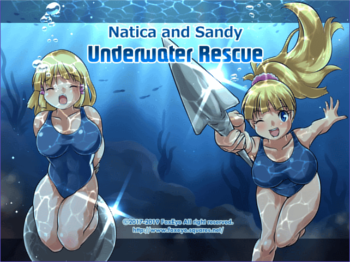 A unique twist on Tower Defense games where the "tower" is just an ordinary person. Each stage has Sandy as the Damsel in Distress who is chained to an iron ball to plummet to the bottom of different flooded locales, drowning her if she's not rescued fast enough. You play as her best friend, Natica, who can speed up the unlocking process of Sandy's cuffs. In the meantime, she can give Sandy a mouth-to-mouth treatment to help her last longer underwater up until her she's freed from her restraints. Natica also brings with her a harpoon to defend Sandy from the ravenous fish and sharks that attempt to nibble and bite her when they get close.

Killing the fish nets you coins, and getting enough coins raises Natica's level, allowing you to select from a list of skills she can gain that will help to make rescuing Sandy easier, such as faster swimming, an invincible swimsuit, and even having Sandy defend herself against the fish for a moment. The more coins you collect, the more skills you can get.

Beating each level treats the player to a piece of Fanservice artwork of the titular duo, which either illustrates their situations and actions in the game, or has them in a Slice of Life moment unrelated to the gameplay.

Natica and Sandy was originally temporarily available during a Christmas Eve event Fox hosted in 2017. In 2019, the game made a return as a part of the Fox Eye Limited Game Collection, alongside 4 other event games for the fans that missed them. The following Christmas Eve of 2018 temporarily released a solo, 3D followup for Natica titled NATICA STAR SPLASH, which has also been included in the Limited Game Collection. The Japanese and English version of this collection can be purchased at DLsite.