"Histacom is a hacking game set in an ultra realistic computer operating system environment indistinguishable from the real thing. It has the unique feature of time travel never before seen in the hacking game genre. The time travel aspect adds great depth into the game allowing the environment (operating system) to evolve as you leap through different ages in computer history."
— 12padams, original developer of Histacom 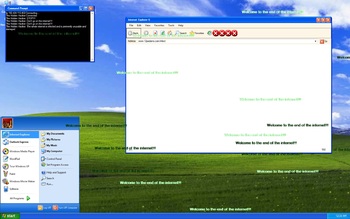 Welcome to the end of the internet!!!

Histacom is a freeware "hacking" game for PC that follows the adventures of a protagonist (named by the player) through time after befriending a mysterious chat room member who refers to themselves as "the Hidden Hacker" and, with their help, subsequently discovering an in-development Windows 95 program known as "Time Distorter" hidden on the personal site of an inconsistently evil software developer called 12padams. Each level of the game takes place in a different version of Microsoft Windows which would have been in common use for the time period, and ends with the player using the Time Distorter to warp to another year. 12padams is initially the antagonist of the story, taunting the protagonist while attempting to remotely trash his computer in retaliation for uncovering the Time Distorter, but after the player escapes using the program, he has a year to calm down and quickly befriends the Hidden Hacker and the protagonist, asking them to help him with further development of the program.

The game was originally developed and released by Philip Adams alone from 2010 to 2013, ending up unfinished. No fewer than four teams of fans have taken over its development since then, each with the blessing of the last, most deciding to start from scratch, and none to date managing to release a game any closer to completion than the original. The game's development is currently 'deprioritised'. Phil later created a Spiritual Successor called ShiftOS, which had a similarly murky development history.