"ShiftOS is a game about evolving an experiemental operating system called "ShiftOS" from a completly black and white text based command line environment to a fully graphical operating system filled with advanced features and beautiful colours.
The game is non-linear meaning you can focus on expanding and evolving ShiftOS anyway you like by earning codepoints and spending them in the Shiftorium with a range of upgrade options. Buy more programs, more colours, GUI upgrades and more while you discover the secret behind ShiftOS.
Advertisement:
Be careful though... ShiftOS is more than just an operating system!"
— DevX, original developer of ShiftOSnote There is nothing to discover - the original developer abandoned the game just before it got interesting. 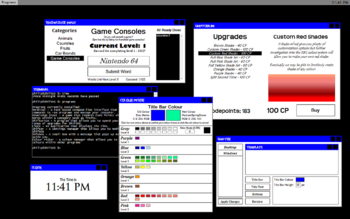 Are we having fun yet?

ShiftOS is a 2015 freeware PC game about a fictional work-in-progress operating system also called ShiftOS. A hacker known as DevX "hijacks" your computer and installs the OS in a barely usable state, forcing you to use it because they needs beta testers, and you must bring your computer back to usability by enhancing the system's functionality by earning and spending "code points".

The game was under active development for several years by the original developer, but it was eventually discontinued. The source code has since switched hands, laying dormant for a while (across this period, a lot of the existing content for and surrounding the game disappeared from the Internet) before being abruptly revived in December of 2016. The game is a Spiritual Successor to Histacom from the same developer, who claimed that the previous game had encountered legal issues due to the heavy use of graphics and sound from Windows.