Videogame / The Huntress Of The Hollow 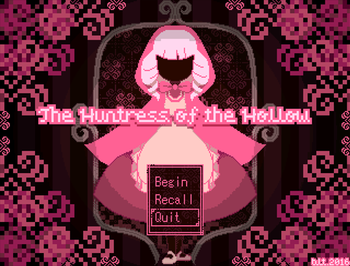 The Huntress of the Hollow is a pseudo-RPG from 2016 created with RPG Maker 2003 by Bleet. It follows the adventures of Lenora Calamint, a young girl who lives peacefully in a village on the outskirts of a forest with her mother. She often delivers treats to her stubborn grandma, who lives in a cabin in the woods. The village and her grandma's home are serene and people live modestly despite the woods being dangerous and plagued with wolves.

However, after a charismatic hunter settles near the village and promises to protect it from the beasts, the wolves begin to torment the villagers, attacking their settlement for mysterious reasons. While some praise the hunter for his help in fighting off the wolves, others distrust him and believe there is something questionable going on.

The game is free to download and can be found here

The hunt was successful!