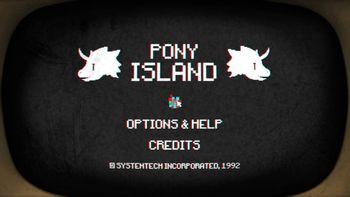 This is not a game about ponies.
"You just had to fix it, didn't you?"
Advertisement:

You are in limbo, trapped in a malevolent and malfunctioning arcade machine devised by the devil himself. The devil detests having his puzzles solved and poor programming exposed; you will need to think outside the box to proceed and you will be insulted when you do.

as a DRM free download and Steam game, as well as Steam itself

It is recommended that you play the game first, as there are major spoilers below, you've been warned.