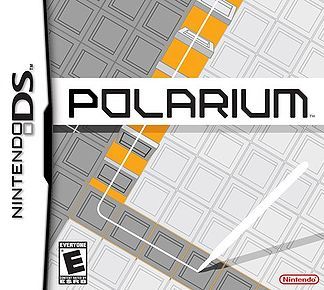 Polarium is a Puzzle Game released for the Nintendo DS in 2004 which was designed around the system's touch screen controls. The player uses the stylus to draw a mark over black and white tiles to flip them over, in a variation of the "match several rows in the same color" type of puzzle.
Advertisement:

The game has two modes. In Challenge mode, blocks fall continuously from the top of the screen while the player must draw and flip tiles to match up even rows. The game also features a puzzle mode, where the player must clear out a full puzzle in one stroke.

The game was a launch title for the system in 2004 and was designed with its unique control system in mind. Despite that, it did receive a sequel, Polarium Advance, for Gameboy Advance the following year which eliminated Challenge Mode and included 365 puzzles.