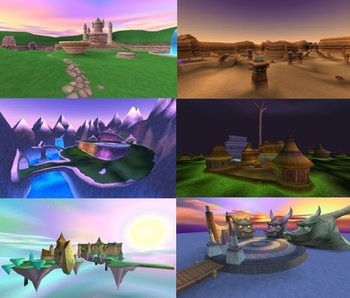 Six for the price of one! Only at Trope Co.®!
Advertisement:

Welcome to the Overworld. This is the neutral unifying setting in a Video Game. It's where you are when you aren't Dungeon Crawling or visiting Adventure Towns.

In Action Games and Platform Games that don't follow the Overworld vs. Underworld format, the Overworld is sometimes referred to as a Ground Level. It's the "basic" themed Video Game Setting as opposed to the more specialized levels or stages that employ special mechanics like swimming. It usually overlaps with Green Hill Zone or the Plains, but it can also be determined by the overall setting. Well lit, safe streets if the setting is confined to one city, or the thinnest part of the Jungle if the whole game takes place in the tropics.

In Adventuring games the Overworld may be a fully explorable world, like a Dungeon or an Adventure Town only much larger with less monsters or NPCs. It will not follow the progression of a Dungeon but will have its fair share of puzzles, mooks, hidden items, passable and impassable obstacles and occasionally a miniboss. It's a good place to explore in between levels.

In RPGs the Overworld may be a Fantasy World Map (see Overworld Not to Scale) used solely for progressing from one Dungeon or Adventure Town to the next. Certain areas that require more nuance or have plot elements around them may shift it to an adventure like format. When crossing a certain bridge or a trekking up a specific mountain path, the camera may zoom in for the section to be drawn to scale and have more opportunities for exploration and solving small puzzles. Always expect random encounters to happen here.

The Overworld will typically play a rendition of the game's main theme. In older games, the song may become Bootstrapped into the main theme just because it's the one song everyone is guaranteed to hear when they play, especially if there isn't a save feature and you always start from the beginning.

A type of Fantasy World Map. In terms of size and activity it is on the 3-part scale of Playable Menu (small, interactive list of places to go), Hub Level (mid size, warps you to other locations), and finally The Overworld (large, environment physically/geographically connected to other places)

Super-Trope to Overworld Not to Scale. Compare Green Hill Zone (the most common type of Overworld) and Hub Level.