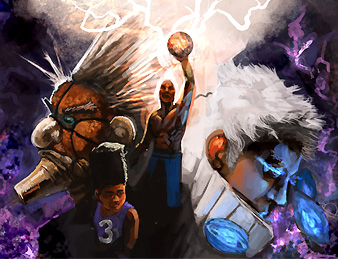 A hero will dunk.
Warning: The article you are about to read is canon.
The Great B-Ball Purge of 2041, a day so painful to some that it is referred to only as the "B-Ballnacht". Thousands upon thousands of the world's greatest ballers were massacred in a swath of violence and sports bigotry as the game was outlawed worldwide. The reason: the Chaos Dunk, a jam so powerful its mere existence threatens the balance of chaos and order. Among the few ballers and fans that survived the basketball genocide was Charles Barkley, the man capable of performing the "Verboten Jam"...
Advertisement:

A freeware RPG by Tales of Game's (sic), and a purported sequel to Barkley Shut Up And Jam.

It's 20 Minutes into the Future In a World… where basketball is Serious Business. The sport has been outlawed and the world's ballers have been hunted down and killed after a forbidden technique known as a Chaos Dunk killed millions.

The game's plot follows Charles Barkley (as in, the actual real Charles Barkely) on a quest to save the world from the nefarious actions of B.L.O.O.D.M.O.S.E.S., a terrorist organization with sinister plans in mind. But in a world as dystopic and dark as this, is anything really worth saving?

If it isn't obvious by the absurdity of the plot description and the insane blending of genres, this game is a massive parody of everything from JRPGS to cyberpunk media to internet culture. Really, the whole game is one big moment of hilarity from start to finish, from the underground colony of furries to the ruins of Proto-Neo-New York and beyond. It has to be seen to be believed. Oh, and did we mention that the events of Space Jam are canonical to the game's timeline?

The full title is Tales of Game's Presents Chef Boyardee's Barkley, Shut Up and Jam: Gaiden, Chapter 1 of the Hoopz Barkley SaGa. And remember: If you can't slam with the best, then jam with the rest.

A sequel, titled The Magical Realms of Tír na nÓg: Escape from Necron 7 - Revenge of Cuchulainn: The Official Game of the Movie - Chapter 2 of the Hoopz Barkley SaGa (colloquially called Barkley 2: Curse of Cuchulainn) has been confirmed, with a Kickstarter

that has successfully met its goal. Taking place in 666X, the game tells the story of the amnesiac cyborg X114JAM9 as he searches for the Cyberdwarf in his quest to to learn who he is. In 2021,after a Troubled Production, the lone remaining developer Paperjack, released what was already made for the game to open source and effectively cancelled the project.

Warning: The tropes you are about to read are canon.

Next time get all four library cards.