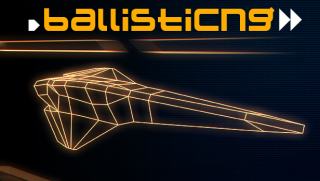 Back to basics.
Advertisement:

BallisticNG is an anti-gravity racing game for Windows, macOS, and Linux created by the three-man outfit of Neognosis, with a port for Nintendo Switch currently in the works. It is largely inspired by the WipEout game series, in particular 2097 and 3, aiming to emulate the latter's gameplay, physics and PlayStation-era graphical quirks while providing a creative sandbox. Player races high-speed anti-gravity ships, using speed, skill, and weapons to gain the upper hand. It comes with multiplayer and full-fledged arcade style single-player campaign.

First released on May 30, 2016, it passed Steam's Greenlight program and entered Early Access for a while. Originally a completely free-to-play game with donation options available through Neognosis' Patreon up until its closure, the developers has since transitioned the game into a commercial title

on September 21, 2017. It left Early Access as a complete game on December 15, 2018. A free expansion pack titled Neon Nights was released on July 26, 2019, with 6 new tracks, a new set of campaign stages, and new unlockable liveries, alongside the announcement of more expansions to come, both free and commercial. Another expansion, Outer Reaches, released on July 20, 2020, adds another set of 6 new tracks and liveries, and a new campaign for $2.99. A third expansion, Maceno Island, was announced on March 10, 2021, the same day of the Switch port announcement, with a release date to yet be determined.

The game can be found on Steam here

. You can also visit the game's official website here