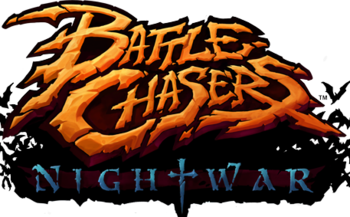 Battle Chasers: Nightwar is a Western RPG Sequel to Battle Chasers, the brain-child of artist Joe Madureira. Originally campaigned on Kickstarter for $500,000 and funded for more than $850,000, the game is developed by Airship Syndicate, a studio co-founded by Madureira and ex-Vigil Games employees, the makers behind the Darksiders series, and published by THQ Nordic. The game was released on October 3, 2017 for the PlayStation 4, Xbox One and PC platforms and on the Nintendo Switchnote The Switch port took a bit of technical wizardry from the developers, coupled with its status as a Kickstarter stretch goal, leading to a six-month delay in May 2018.

Set sometime after the original comic run, Battle Chasers: Nightwar continues to follow Gully, Garrison, Knolan, Calibretto and Red Monika as they crash-land on the Crescent Isles after their airship is attacked by pirates. Heavily inspired by game-play from Eastern RPGs and Turn-Based Combat systems, Nightwar takes cues from Japanese-developed video games such as Chrono Trigger and Final Fantasy, while adding in western-influenced mechanics, like Randomly Generated Levels and equipment loot.

Mechanically speaking, one of the main focuses of the combat in the game is on buffs and debuffs. Almost every move in the game from both heroes and enemies inflicts one or more of these effects, and it's managing them efficiently that makes up much of the combat strategy.

Tropes for Battle Chasers: Nightwar include: