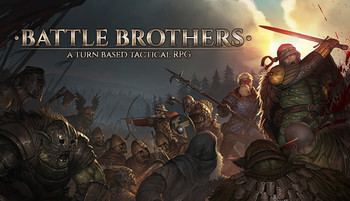 Do you have what it takes to lead them through bloody battles and to victory?
Advertisement:

Battle Brothers is a medieval Roguelike Turn-Based Tactics game, best described as a fusion of XCOM, and Mount & Blade, with a healthy heaping of Warhammer Fantasy (or perhaps more accurately the Mordheim spinoff game) and a dash of The Black Company.

You play the role of the leader of a mercenary warband in a procedurally-generated Low Fantasy Crapsack World. It is completely up to you where you go, who you hire and who you fight, what contracts you take, and how you train and equip your battle brothers towards a single objective: keeping them (and you) alive and the coffers full, for as long as you can. The game will put you up against rival warbands of mercenaries, Greenskins, bandits, undead, robber barons, and countless variety of monsters, so the answer is not quite 'when will everything go wrong', it's how.

You might not be able to save the world or save the girl, but you can at least try and save for your retirement.

Battle Brothers was released on March 24, 2017, for Windows on Steam, and the Humble Store after an early access release on April 27, 2015. It then received several DLCs: