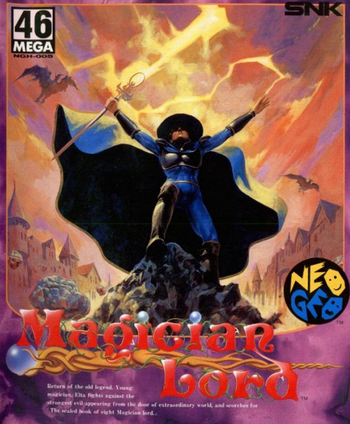 Magician Lord was one of Neo Geo's launch titles in 1990 and a Killer App for its time. A Platform Game made by ADK, it tells the story of Elta, a young wizard entrusted with the task of collecting eight magic books to keep Az Atorse, the god of destruction, sealed. The evil necromancer Gal Agiese however wants the power of Az Atorse for himself and challenges the young wizard to retrieve them. The game is divided into eight stages, each one of them culminating with the battle against a "guardian" (basically, a sub-boss) and then against Gal Agiese himself, every time turned into some grotesque creature that represents Az Atorse's power (or maybe he's just dicking around with Elta, who knows).

The defining feature of the game was the ability to collect colored orbs to turn Elta into six possible forms with different abilities, increasing for example his agility, jump or firepower. The title is also remembered for its presentation (thanks to the power of the hardware), with great graphics and an amazing soundtrack, but also for its difficulty (it was produced by SNK after all) and for many amusing Engrish quotes. Magician Lord remained an arcade and Neo Geo-only release until the 2000s, when it was ported to Wii's Virtual Console, SNK Arcade Classics Vol. 1 for the Nintendo Wii and the PlayStation 2, and later to the PlayStation 3 store, PlayStation 4 and Xbox One.