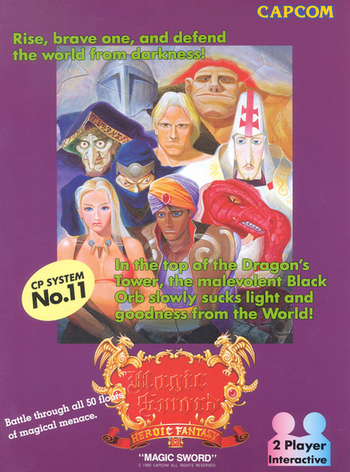 This was literally the cover. Though, the Japanese version

Magic Sword: Heroic Fantasy is a Medieval European Fantasy-themed side-scrolling Hack and Slash Platform Game developed by Capcom for arcades in 1990, and ported for the SNES in 1992 as Magic Sword, albeit losing what was probably its main draw: the option for a two-player cooperative game. Outside that, the only other notable element of the game is the use of Assist Characters: eight different characters (Amazon, Bigman, Priest, Wizard, Thief, Ninja, Knight and Lizard Man—not that one) held captive behind doors found all throughout each stage, which the player can open with keys he gets from treasure chests. Each helper has its own strength and weakness (and some even special abilities), and they gain levels by picking certain items. The player can't control his partner's movements, and they only attack when the main character attacks on his own.

The story is set in a nameless world, which is being oppressed by the resurrected Evil Lord Drokmar and his armies of ghouls and monsters. Drokmar's immense evil power comes from an artifact known as the Black Orb, a crystal that has increased the Evil Lord's powers significantly. By request of the ruler of the land, the main character (originally "The Brave One", later named Alan) accepts to destroy the orb and bring light back to the lands. But in order to do it, he'll need to ascend the 50-story Dragon Keep and defeat Drokmar's five sages, claiming the Magic Swords in their possession so he'll have a fighting chance against Drokmar, awaiting on Floor 50.

Outside a few Capcom compilation games, Magic Sword reappeared in 2008 as a port for mobile phones, and 2010 when it saw a re-release as a bonus bundled with the HD remake of Final Fight.

Not to be confused with the old live-action film The Magic Sword.