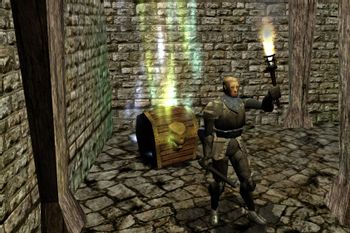 "Now where could they possibly be hiding that mission-critical object?"
"Experience has taught me to investigate anything that glows."
— Sonic, Sonic Colors
Advertisement:

If you want the player to notice something, you gotta make it obvious. No, more obvious than that. Neon sign visible from orbit obvious. Fourth Wall endangeringly obvious.