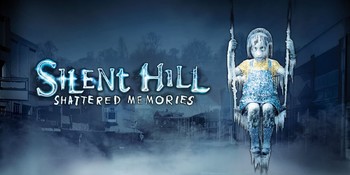 Silent Hill: Shattered Memories, a 2009 re-imagining of Silent Hill, keeps the underlying story the same: following an accident that leaves his car totaled, Harry Mason searches for his missing daughter, Cheryl, in the seemingly-abandoned town of Silent Hill.

Numerous new elements were introduced to the series in Shattered Memories, including a much-touted psychological survey that tells players the game will "get in [their] head". This survey — as well as a player's actions throughout the game — will alter accessible areas, character appearances, and even characters' attitudes. Shattered Memories also alters nearly all the audio files and notes players find during the course of the game in subtle ways — while the context of these "flashes" will generally appear the same, the content will have subtle (but significant) alterations, even on repeated playthroughs.

As part of a new emphasis on "psychological" horror over "survival" horror, the combat system was removed, leaving a player with three options upon encountering a monster: run, find a flare (which wards off the monsters for a short time), or hide. The success of this new setup can vary, but numerous reviewers welcomed this "refreshing change"

in the genre (as opposed to the jump-scares utilized in Doom 3 or the "fire into hordes of zombies and hope you survive" direction Resident Evil had taken at the time).