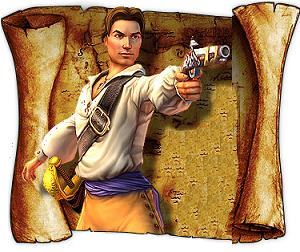 Sid Meier's Pirates! can refer to any of three related games. The original game was released in 1987; an Updated Re-release called Pirates! Gold came out in 1993; and a new re-release (reverting to the original title) was released in 2004. The basic premise of the games is the same: You start out as a new Privateer captain in the Caribbean Sea with a Letter of Marque issued to you by one of four nations (England, France, Spain, or the Netherlands). The game is a Wide-Open Sandbox, allowing you to take a wide variety of actions: Go the traditional pirate route and attack other vessels for loot and plunder, romance governors' beautiful daughters, search for other pirates' buried treasure using Treasure Maps, clear the high seas of all rivals who would stand in your way, or even go the boring "peaceful trader" route. One notable feature of the game is that the protagonist can never actually die; defeat in combat (or failure in other regards) generally leads to being either thrown into a Cardboard Prison or marooned / cast away on a desert island, both of which you can eventually escape from. Also, unlike many other games, age does affect your character; his fencing and dancing skills decline noticeably with age.