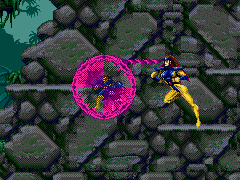 Jean will keep her teammates' feet on the ground.
"Pitfalls got ya down? Way down? This balloon will really lift your spirits!"
— Funky Kong, Donkey Kong Country: Tropical Freeze
Advertisement:

You're playing a game, make a jump, and you miss, falling down a Bottomless Pit. There goes one of your lives...

But wait, something is happening! Either you or someone else is pulling you up.

A type of Nonlethal Bottomless Pit, except that instead of respawning back on safe ground with no explanation, something automatically retrieves you from the pit first.

Note this doesn't count if this occurs during a cutscene due to Gameplay and Story Segregation, as those tend to work only when the plot demands it.

A Sister Trope to Edge Gravity.