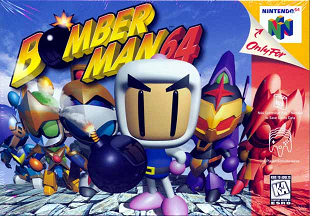 Boom! Shake the room! Bomberman's back and he's set to blow up the N64 with all-new features.
"Planet Bomber was a peaceful planet that had never experienced danger. Suddenly, Altair's huge ship arrived and initiated its attack. Bomberman was stunned as there was nothing he could do to stop the huge ship. Then, Sirius, a mysterious helper appeared in front of him...
Listening to Sirius's advise, Bomberman began his journey to destroy the bases of Altair's allies. What is waiting for Bomberman? Who is Sirius, the mysterious helper? Unless Bomberman destroys the enemies, there will be no peace on Planet Bomber. This is the beginning of Bomberman's battle.
— Page 7 of the European Manual.
Advertisement:

Bomberman 64 is the first game in the Bomberman franchise for the Nintendo 64, released in 1997. It was followed in 1998 by Bomberman Hero, then had a more direct sequel in 1999 with Bomberman 64: The Second Attack!.

A strange fortress descends upon Planet Bomber and begins attacking the inhabitants of Bomber Town. Attached to the fortress are four pieces of other planets that have been conquered by Altair and his Masker Trio. Bomberman, joined by a strange new ally named Sirius, must disconnect the four pieces from the fortress so that he can reach it and defeat this new threat to Planet Bomber.

64 was the first game proper to bring Bomberman into three-dimensions, and the first game not to feature the traditional grid-pattern in either the level design or the bomb explosions; the bombs instead explode in a hemisphere. Most of the powerups from the series retain their original use, although they are adapted for this new gameplay style. The Bomb Kick and Bomb Throw are useable from the very beginning.

Useless trivia: the engine was later reused for the first three Mario Party games, as evidenced by similar assets appearing across the N64 era and a Bomberman sprite appearing among the second game's assets.