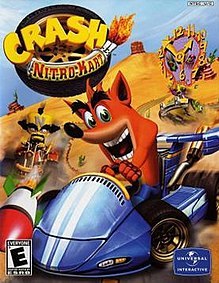 Crash Nitro Kart is a kart racing game. It's the second Mascot Racer spinoff of the Crash Bandicoot series after Crash Team Racing, and the first console title to be developed by Vicarious Visions, who had previously worked on the two handheld titles. It was released for the PlayStation 2, Xbox, and Nintendo GameCube and Game Boy Advance in 2003 and the N-Gage and mobile devices in 2004.
Advertisement:

On a relaxing day for the Bandicoots, and in the middle of working out an Evil Plan on Dr. Neo Cortex's side, both wind up kidnapped and finding themselves in a galactic racing circuit hosted by Emperor Velo XXVII, alongside N. Trance and Nitros Oxide. Velo challenges them to a race, rewarding them with freedom if they win, and threatening The End of the World as We Know It if they refuse. With little choice, they accept the race.

It's followed by Crash Tag Team Racing in 2005, which had new developers and a more distinct feel than CNK.

Crash Team Racing: Nitro-Fueled, which was released in 2019, features remade elements from this game, including all thirteen tracks and karts as well as making the entire roster playable from the start (Spyro and Velo were added in during Grand Prix events). Anti-gravity physics present in certain stages have been removed to better sync the content with that of Crash Team Racing.