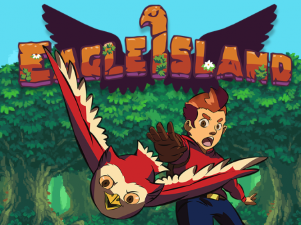 Eagle Island is a Metroidvania-inspired platform game featuring RPG-esque elements and procedural level generation. It was developed by Nick Gregory.

The story follows Quill and his owl Koji as they set out on an adventure to rescue Ichiro, Koji's brother, from the clutches of Armaura the gargantuan eagle deity. On their way they must also rescue the Totems – Magira, Icora and Zephara – before they too end up in her grasp, as tasked by Dr. Oliver Ornis. But as it seems, there might be more to it than a simple rescue adventure...

In this game the player takes control of Quill, one of the protagonists in the game. The player's job is to vanquish the enemies by casting Koji off into them, collect various treasures to help him along and advance up until the level's boss. There are 9 different areas available for exploration.

The game was crowdfunded in a Kickstarter campaign